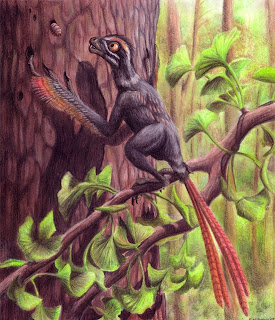 And here's number six. Epidexipteryx is a fairly recent discovery from the mid or upper Jurassic-age Daohugou Beds of Inner Mongolia, China, and is a maniraptoran of the same family as Epidendrosaurus, on which the speculative third digit is based.

What makes Epidexipteryx unique is its tail, which sported several long, flat feathers anchored to a skeletal structure similar in nature to the modern pygostyle of birds. The tail feathers appear very primitive and completely lack barbs, and instead are like long, flat sheets of keratin supported by a central rachis. 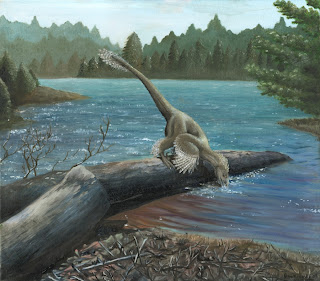 Sinornithosaurus is the fifth illustration for the book, also from last summer.

This animal was a feathered dromaeosaurid from the early Cretaceous of China. It is very similar to Velociraptor, though of around half its size, and is known from two fossils, both of which preserve a full covering of feather impressions.

It is perhaps most famous to the general public through the NGMC-91 specimen, a juvenile dubbed "Dave", which is exquisitely preserved. 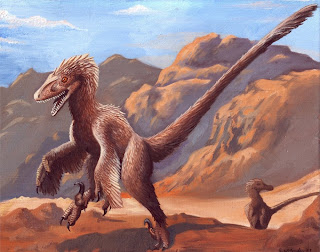 The fourth illustration in the series of feathered dinosaurs for the book. This is the famous Velociraptor depicted in its native Cretaceous environment of desert Mongolia.

Velociraptor was a small dromaeosaur, or raptor dinosaur, and contrary to its most famous depictions was almost certainly feathered from head to tail. This is no longer based merely on phylogenic evidence, either - as of 2007, reanalysis of the fossil has shown that its posterior forearm contains quite obvious quill knobs. 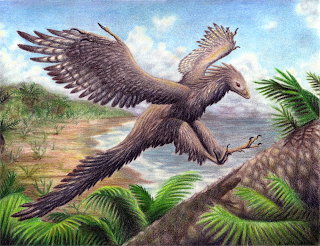 A piece from last year, this famous bird-dino is still one of my favorite colored pencil attempts I've made thus far.

It's Archaeoptyerx lithographica in its native environment of the tropical Solnhofen, of modern-day Germany. Archaeopteryx was a very small animal, roughly the size of a modern-day pigeon (not including its long, bony tail, a feature not found in extant birds) and lived 150 million years ago in the Tithonian stage of the Jurassic. Archaeopteryx remains one of the best champions of evolutionary theory due to its status as a "transitional" fossil, providing a clear example of an overlap of avian and dinosaurian features.

Another for the anti-creationism project, from March of 2009.
Posted by Emily Willoughby at 3:11 PM 1 comment: 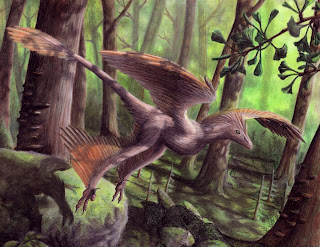 My second in the series of images for the anti- creationism project. This one is Microraptor gui, a small dromaeosaur from the early Cretaceous of Liaoning, China. It is unique in that several of its described fossil specimens are preserved with a very distinct covering of feathers, including long flight feathers on its feet and hind legs. It probably used the combined effect of these four wings to glide or "parachute" short distances.

This one was done in conte crayon, and is from May of 2008, though it has been touched up very slightly since then.
Posted by Emily Willoughby at 2:33 PM 1 comment: 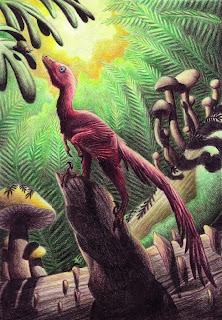 Well, I finally decided to register a blog to post some of my artwork.

Hopefully, I'll be using it to post all sorts of things I produce concurrently - sketches as well as finished works - but in the meantime, I wanted to post some of my favorite old pieces just to get things going.

This is a colored pencil piece of a troodontid dinosaur known as Jinfengopteryx, from summer of 2007. This is the first piece of art produced for Jon's book, which we began working on that summer.
Posted by Emily Willoughby at 4:33 AM No comments: