Many of you are probably aware of the new paleoart book All Yesterdays, written by Darren Naish of TetZoo, John Conway, C.M. Koseman, and Scott Hartman, and illustrated by the latter three. Right now only the Kindle edition is available on Amazon, but the print version should be out soon, last I asked. In any case, I'd eagerly awaited this book for some time, and wanted to write a review for Amazon after it was released. I thought I'd post my review here as well in the hopes of inciting the interest in my paleo-minded followers. 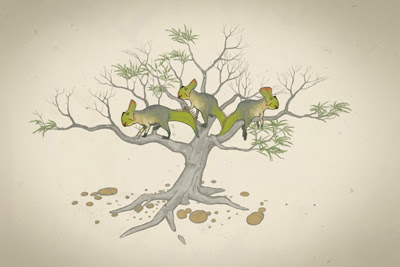 Conway's illustration of Protoceratops in a tree serves as the book's cover, and demonstrates the idea that animals can do things they don't necessarily do all the time

Paleontography - the science of accurately illustrating extinct animals - has gotten a bit more press in recent times, but All Yesterdays is the only modern book that I can think of that's actually about paleontographic illustration itself, rather than just serving to showcase a selection of artists' work. In this, it carves out a unique niche in the world of publications on dinosaur art, and is an invaluable resource to anyone hoping to make an impact in the field.

The central tenet of the book is that paleontological illustration, despite having undergone many changes over the decades, has largely fallen into a pattern of being both uninformed and uncreative, and that there is a better way - not just a way, but a way of thinking - in reconstructing these extinct animals. When we know an animal only from (often only parts of) the skeleton, we have to consider all of the plausible and interesting ways that the soft tissue and integument would have covered the bones in life, while still remaining true to the limitations of the skeleton and to inference from modern analogues and relatives. The same goes for behavior, which is very rarely preserved in the fossil record and for which most paleontography has been woefully narrow in its depictions. Birds, for instance - the closest living relatives of extinct dinosaurs - have an enormous variety of bizarre and beautiful integument that could not possibly be gleaned from bones alone. Birds also exhibit some of the most varied behaviors of any group of tetrapods, from nesting, to courtship, mating, exploration, and feeding. Why should this incredible wealth of artistic possibility be neglected in paleontological illustration? 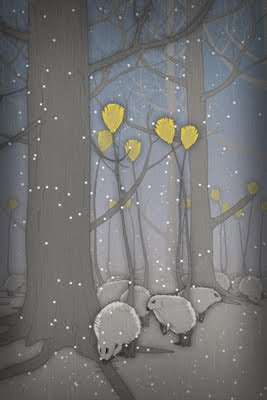 All Yesterdays does a wonderful job exploring many types of these possible reconstructions through illustration and explanation. The book is divided into two main sections: the first, the eponymous bulk of the book, focuses on creative, unusual, but completely accurate reconstructions of various extinct animals (mostly dinosaurs) engaged in various behaviors and interactions. The majority of these are illustrated by John Conway, with his beautifully nuanced and atmospheric usage of color and light, and also includes a smattering of Koseman's colorful, clean-lined illustrations. Most scenarios are accompanied by a lateral skeletal reconstruction by Scott Hartman, useful for comparing the illustrated animal in life to its bare bones, which should be hidden under layers of fat, feathers and fuzz. 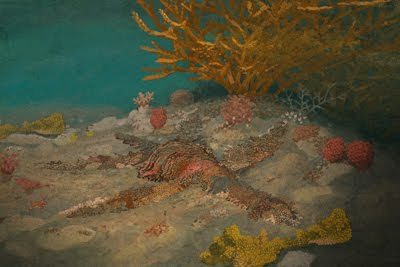 This section draws attention to plausible but oft-ignored possibilities for paleontological illustration, such as the usage of cryptic camouflaging, signaling integument, play, and mating. The well-read dinosaur afficionado probably won't learn too much that's wholly new (though I did learn the term 'musth', which is apparently the animal equivalent of pon farr), but the illustrations are new enough, both in concept as well as actuality, as the book features a lot of Conway's work I'd never seen before. Some of the illustrations are just stunningly gorgeous - his Therizinosaurus, Heterodontosaurus and Tenontosaurus were especially striking to me.

The latter section of the book, cleverly titled "All Todays", is like the first half in reverse: it posits a hypothetical scenario in which intelligent alien researchers come to our planet in the distant future and are presented with only the skeletal remains of modern animals. How, then, will tomorrow's paleontological artists reconstruct the animals of today? This section is far more amusing and more whimsical than the first section, but it certainly does a good job of highlighting how ridiculous and constraining some of our paleontographical dogma is in reality when applied to modern animals whose appearance we're already familiar with. It points out specific pitfalls of modern dinosaur illustration, such as "shrink-wrapping" (wherein the skin is basically drawn directly over the skeleton, showing every nuance of skeletal anatomy) and pigeonholing tall neural spines as a "sail". When modern animals follow the same constraints that we unwittingly apply to our paleontological illustration, some frightening and quite nonexistent creatures emerge. Some of my favorites from this section are the shrink-wrapped cat (which is clearly a pack hunter and a predator of humans, since their skeletons will usually be found associated with human "nests"), the fluffy iguana, and the hummingbird parasite. 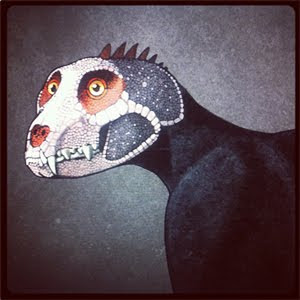 This is how future scientists might reconstruct a very familiar animal - but what is it? Buy the book to find out.

(I also enjoy the slightly wry, tongue-in-cheek manner in which most of the book is written. For instance, the line "Camarasaurus [...] is considered by some experts to be among the ugliest of all sauropods" brings to mind an image of a team of paleontologists sitting around their computer, writing a publication on what research has determined is The Ugliest Dinosaur.)

In conclusion: if you are even slightly interested in paleontography, I would highly recommend this book if for nothing more than the very novel viewpoint it takes on the field. For an illustrator of extinct animals or a researcher who relies on these illustrations, there are a lot of invaluable lessons to be learned from the material within. For everyone else, there are some really, really pretty pictures to look at.

Buy it on Kindle at Amazon
Attend the launch event in London
Posted by Emily Willoughby at 12:04 AM