The Many Meals of Microraptor

As a lot of you will already know by the time of reading this, a recent publication in the journal Evolution demonstrates that the four-winged, tiny dromaeosaur Microraptor was at least occasionally in the habit of ingesting fish. Scales and portions of several disarticulated skeletons of the osteoglossiform Jinanichthys were found fossilized in the specimen's gut. The authors do not discount the possibility that the fish were scavenged, but considering other known habits of the four-winged wonder, it seems at least reasonably likely that it caught the fish itself - and unlike previous known gut contents, it couldn't have taken this meal in the trees (though it's hard to know what the nay-sayers will claim next...). 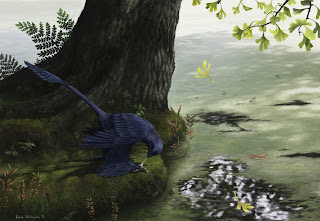 Xing et al 2013 describes fish remains in the gut of a Microraptor specimen
This newest study is another piece in the puzzle of Microraptor's ecology - a puzzle which is looking more complete as time goes by. With over 300 undescribed specimens, at least three perserved meals (all different), a color study, conflicting scleral ring studies, and a myriad of biomechanical research, we now know a tremendous about this animal (at least for being dead 120 million years).

But can we extract a reasonable approximation of its diet and lifestyle from the available information? To answer that, one option is to look towards modern birds. But first, let's look at what we do know.