Every other paleo-nerd with a blog is posting about this, so I guess I'll join the bandwagon! 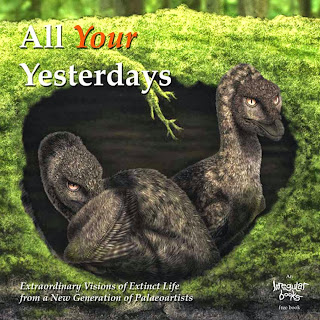 All Your Yesterdays, a new book by C.M. Koseman of Irregular Books, has just been released and is now available for download! Brought to you by the same group that published the game-changing paleoart book All Yesterdays (see my review of that book here), All Your Yesterdays is a compilation of paleoart from dozens of different artists that seek to explore unusual aspects of rational paleontological speculation. I have three pieces in the tome: two Microraptors doing unusual but plausible things, and a Utahraptor being unusual just by virtue of not trying to kill anything. Many other aspiring and talented paleoartists have tackled such scenarios as lactating stem-mammals, polycephaly and cancer in dinosaurs, and many unusual - though often quite reasonable - display structures. 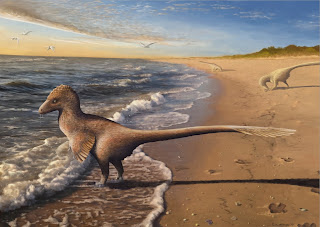 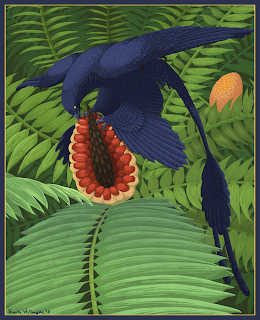 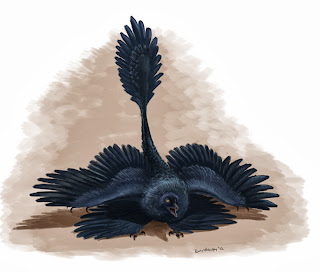 The book is available for free download, but please consider donating to keep the fine folks at Irregular Books producing fabulous work!
Posted by Emily Willoughby at 5:22 PM 1 comment:

This is a very small watercolor "sketch", part of which was for a friend, and the scene inspired by Jon's novel-in-progress...

Obviously this is a very speculative scenario, perhaps a bit All Yesterdays-esque, and is speculative in a number of ways:

1. Family groups in dromaeosaurs are definitely not outside the realm of possibility, and may be more likely than the tired "pack" scenario, at least until the young disperse (fledge? Wean?). Here, the male and female are depicted in a monogamous pair-bond, and jointly care for the young.

2. The male is the more brightly-colored of the two, and the female is similarly-colored but a bit duller, and with more banding. The display feathers in the male are green due to a pigment molecule similar to the pigment turacoverdin, the only known green pigment in birds, and the pigment responsible for the green coloration in turacos. There is evidence to suggest that turacoverdin - or a molecule structurally very similar to it - arose at least twice in modern birds, once in turacos and once in the northern jacana, a totally unrelated bird. Therefore it's not totally outside the realm of possibility that a similar compound evolved independently in dromaeosaurs as well. Turacoverdin is copper-based porphyrin and turacos derive their copper from the fruit they eat, but Deinonychus could derive its copper from the livers of its prey, which is also high in copper.

3. The female is carrying its young on its back, much in the same way that some waterbirds like loons and grebes, as well as crocodilians, do with their young. The idea is that Deinonychus occupies a large territory and would needing to constantly hunt to feed the brood, and would be moving location too frequently for young to easily follow on foot. Here, one chick is using WAIR to climb up its father's back, which is something that some modern young birds also do.

4. The chicks are patterned similar to baby ratites, which are often streaked or spotted until they get older.

5. The feathery toes, while not terribly unique due to finds like Anchiornis, are loosely based on Matt Martyniuk's new post on dinosaur foot scales, which indicates that scutes may have evolved from feathers, rather than the opposite. The chicks here don't have feathery feet because the animals would have evolved from an ancestor that had pebble-scaled feet without feathers or scutes, and ontogeny occasionally very loosely recapitulates phylogeny. (Alternately, I could have depicted the chicks with voluminous legwings, since legwings may have been an intermediate stage between pebble-scale feet and scuted feet).
Posted by Emily Willoughby at 1:31 AM 6 comments:

The Most Accurate Inaccurate Utahraptor

This is a commission of a Utahraptor "reference" for a friend. It is entirely based only on material that is currently-published, and is therefore technically inaccurate considering the existence of unpublished material. However, my client wanted an image of Utahraptor that is "as accurate as possible" based on the knowledge we've had on the critter up to this point. Once the new material is released to the public, this image will be modified to reflect the updated anatomy, and will therefore serve as an interesting "before" and "after" for the animal.

Anatomy is based on Scott Hartman's technically-outdated Utahraptor skeletal diagram.
Posted by Emily Willoughby at 10:51 AM 1 comment: