Mei long is not always sleeping 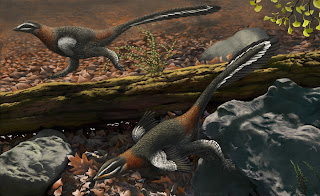 This is my entry to the current art contest at Hell Creek forums. The challenge for this round was "Year of the Dragon", which means that we had to draw any prehistoric animal with "dragon" somewhere in its name. So I drew the tiny troodontid Mei long, the famous sleeping dragon. I'd wanted to draw this animal for a while, so it was a good excuse to put some more effort into it than I normally would've.

Mei long is well-known from its beautiful holotype, which shows the animal perfectly preserved in a sleeping position when it had died, presumably from volcanic ash. The curled holotype is tiny - probably no larger than a softball - but many people don't seem to realize that it represents a very young juvenile. The adult animal was probably a strapping troodontid around the size of a duck. I've reconstructed two adult Meis here, a male and a female, running through a rare patch of Liaoning deciduous trees. The male is nearer to the viewer and is almost identical to his mate save for brighter rufus display patches and a reddish facial streak. Many birds, such as woodpeckers, exhibit a similar sort of dimorphism.

I wanted to draw this cute little troodontid doing something other than sleeping, for once. Even though its holotype fossil is one of the most gorgeous paravians to come out of China (and that's saying something), reconstructing it in this position every time is overlooking the beauty the animal surely exhibited in wakefulness as well. This long-legged, pheasant-sized troodontid was probably a fleet of foot, agile little predator that may've darted through the undergrowth and over logs, flashing glints of shiny feathers in the sunlight.
Posted by Emily Willoughby at 12:31 AM