The Neck is a Lie

Matt Wedel of SV-POW has a pair of old articles on how necks lie, illustrating in a general sense that the skeletal structure of an animal is often at odds with its physical appearance. No part of the skeleton emphasizes this discrepancy more than the neck, especially in birds. These have always been some of my favorite SV-POW posts, not just because of how crazy it is to see a budgie's cervicals overlap its trachea, but because the prevaricative nature of the neck has a great deal of application to paleontographic reconstructions of dinosaurs.

Ardeidae, the heron family, demonstrates an excellent variety in neck shapes and neck capabilities. Most of us are familiar with larger heron species, like the great blue and the great egret. Both of these birds are very large, and have extremely long, serpentine necks. But these necks don't lie - by paleontography standards, they are almost "shrink-wrapped" in appearance, and clearly show the accurate contour of the vertebral column. 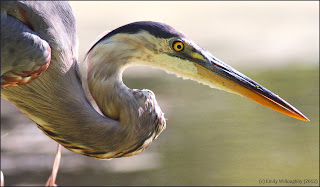 Look at that glorious S-curve.

Herons are really cool in a lot of different ways. They're the only group of birds that have a very specialized, elongated vertebra in their neck that enables them to strike at prey with a remarkable amount of force. The bone works in a similar way to how a spear thrower works, by elongating the "reach" that increases the leverage of the spear - or in this case, the heron's beak. 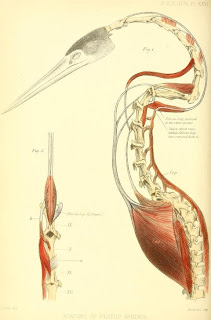 This drawing of an anhinga skeleton, from the Proceedings of the Scientific Meetings of the Zoological Society of London for the Year 1876, clearly shows this long vertebra, which gives the neck a distinctive "kink". 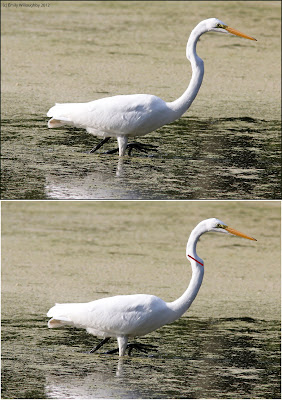 This "kink" is also highly noticeable in living birds, in this case the great egret. Like the great blue heron, the great egret's neck is very honest.
From my own experience with living birds and bird photography, no bird has a neck that lies more than that of the beautiful little bittern-like green heron, Butorides virescens. This heron can be found all throughout the U.S., but is secretive and uncommon unlike some of its larger brethren. I had the pleasure of finding a green heron in the marshy edge of a shallow pond in the Princeton area recently, and spent a good few hours photographing the little guy. These birds stand around 18 inches tall, which is small for a heron. I watched this fellow stalking ever so slowly through shallow duckweed, striking occasionally at tadpoles and tiny fish. He would sometimes get bored with that and try for dragonflies instead, usually unsuccessfully. Though small, he had a very powerful little neck, with the same ability to strike quickly and accurately that the great blue has. 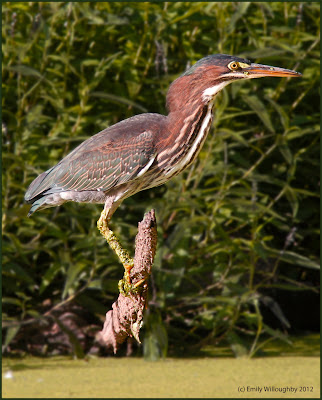 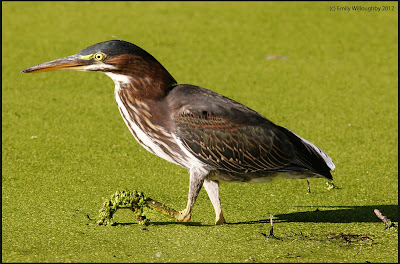 Green herons also have remarkable binocular vision. Not only are their eyes oriented forward, but they're also oriented downward, to better see delicious noms beneath the surface of water while enabling the herons to remain as still as possible, without needing to move their heads. 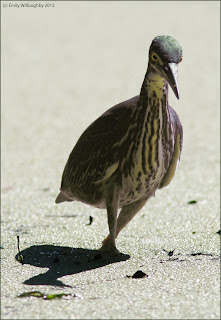 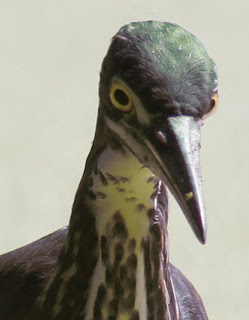 All the better to see you with, my dear.

But this heron's neck lies. Most of the time, when stalking, still, resting or eating, the green heron's neck forms a perfect contour with its body, giving it a very stout, compact, aeroshell look. Only when striking - which takes less than a second - or looking high for danger is the true length of the bird's neck revealed. 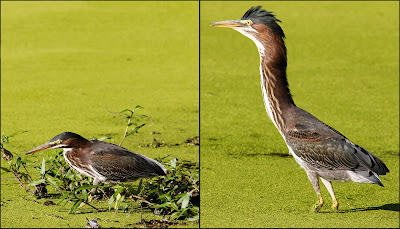 Up periscope!
When the green heron is startled, it will stretch its neck up as far as it'll go. The same mechanism that evolution has bestowed upon the bird to quickly strike at prey also enables it to see great heights, far above the "normal" height of the bird. It will then quickly retract the neck back to its former position, the feathers forming a contour flush with the feathers on its back and torso. Folded so tightly, it is honestly hard to imagine where the neck goes!

The green heron provides an interesting implication for reconstructing feathered theropods, particularly deinonychosaurs. Artists have been fond of drawing analogies between unenlagians and the heron family for quite some time, and the long, serpentine neck of the Ardeidae indeed seems reminiscent of these graceful, compact maniraptorans. But recently it has become more and more popular to eschew the S-curve of Paulian paleoart, adopting a new "aeroshell" look that highlights the birdlike quality of these dinosaurs.

As with many trends in paleontongraphy, this preference started out with good intentions but has perhaps gotten overemphasized a bit to the point of ridiculousness. Why is one of these reconstructions necessarily wrong, and the other necessarily right? The heron family, and the green heron in particular, can perhaps teach us a more reasonable way of reconstructing deinonychosaur necks. Let's remember that most birds can do this to some extent, the green heron just illustrates it at the extreme. And, of course, I'm not encouraging shrink-wrapping our dinosaurs - after all, what would our perception of a bald eagle look like if we'd never seen a living bird and had only the bones to go on?

Hopefully not like this.
But the green heron teaches us that a bird's neck can take on many different forms. Likewise, the necks of deinonychosaurs could probably appear different depending on the current behavior of the animal. Is it cold, so the animal has its feathers extended and its neck retracted? Is it scanning for danger and trying to extend it as far as possible? We rarely see deinonychosaurs illustrating different neck positions on the same species in paleoart!

Larger dromaeosaurs are less likely than smaller ones to have such a filled out, poofy neck. We can think about this in a variety of ways - modern ratites, probably the best comparison to extinct deinonychosaurs, have long necks that don't tuck into the contours of their bodies in the same way that smaller birds' necks do. Even aside from that, though, we can again think of this in terms of the green heron. Large heron species like great blues and great egrets are big enough that they don't really worry about predators very much and don't really try to hide. Green herons are very small, and they make a tasty meal for large birds of prey, foxes, and other large-to-midsize predators. So they need to adopt a much more elusive lifestyle, which is reflected in their coloration as well as their behavior. They have need to make their bodies as small as possible to avoid detection, which may be part of the reason they can vanish away the length of their necks in a poof of feathers.

More bars in more places.
Dromaeosaurs like Utahraptor probably didn't have skinny, serpentine necks, but I doubt they had complete aeroshells either. No modern bird has body feathers the length that a Utahraptor would require to puff out its neck like a small bird. And why would they need to compact their neck into their body anyway? Smaller deinonychosaurs and basal birds would definitely have had the aeroshell look, there is no doubt in my mind about that. We really need to stop drawing Archaeopteryxes with a snake neck; aside from being inaccurate it's just downright ugly. But more importantly, what small bird - you know, the size of Microraptor, Archaeopteryx, and similar animals - has a snake neck that can't retract into an aeroshell like the green heron? As in birds, all deinonychosaurs aren't created equal, and their size and habits must be taken into account when reconstructing them as accurately as possible. 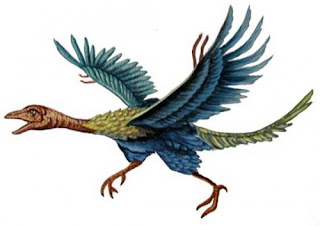 And the right way, by Jennifer Campbell-Smith. It looks like an actual bird! Imagine that.
In paleontography, I always think it's more important to think for yourself instead of just following the latest trend or copying old, outdated illustrations. Think about niches, sizes, and phylogeny, not just bones. Draw comparisons to modern birds, but don't lose sight of what makes non-avian maniraptorans distinct and different from them. Necks might lie, but you don't have to.
Posted by Emily Willoughby at 9:10 PM