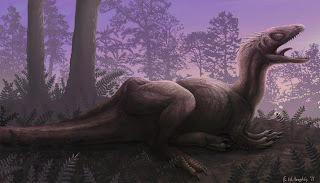 Illustration of the new theropod Concavenator corcovatus described in September. Concavenator was a mid-sized carcharodontid dinosaur with two very unique features: elongated vertebrae forming two "humps" on its back, as well as what might be primitive quill-like integument on its arms. The validity of the quills is debated, though, as the knobs found on the bones may be muscle attachment points rather than quill anchors.

The discoverers theorize that the elongated vertebral crests may have supported a hump whose function was in thermoregulation. While I neither support nor deny that hypothesis, I chose to illustrate the animal beginning to rustle from rest at dawn, as it absorbs some of the sunlight needed to start its day.