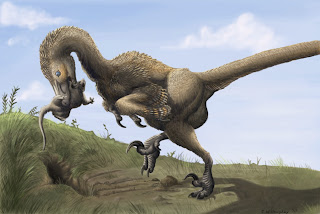 This is an illustration of a new discovery involving fossilized scratch marks, presumably from the foot claws of a maniraptoran, at the entrance to an ancient primitive mammal burrow.

The scratched-out burrows provide a unique insight into both the behavior and diet of these dinosaurs, which must have occasionally dug out the burrows of their prey, like many modern predators do. This trace fossil was found in Utah and is dated at around 80 million years old, which means the claw marks could belong to several different small dromaeosaurs or troodonts. I've illustrated the dromaeosaur Saurornitholestes here, which was similar in size and anatomy to Velociraptor. The findings were published in the journal Geology.

All of the news articles I've seen describing this finding have included pretty crappy illustrations, so I was inspired to create my own. I may also send it to the authors of the paper.